As I’ve grown older, and now at the age of 61 years old, I look back at the chapters in my story.  I was raised in a very structured, loving and active environment.  I can remember the three square meals a day my parents were there to provide.  As an added part of my day, I was encouraged to run home from elementary school for lunch every day.  Things were done very quickly and efficiently to leave time for practice at football, basketball, baseball, ping pong or any other mental task of the day before returning to school.   This is the way it was.  This was a normal day for me and it always stuck with me throughout my life.

Having this kind of structure gave me great confidence and I was always the younger kid on the block trying to convince the older kids to let me compete in their backyard games.  Though I was smaller and skinny, my speed was my greatest asset and I learned to utilize it to succeed.

As I look back on junior high I recognized I was hardly the best athlete.  In fact, usually the sixth guy on the basketball team trying to break into the top tier.  I experienced great growth as I progressed through high school and caught my first break when I was noticed by an MSU football coach while he was recruiting a player from the opposing team.  I started having a vision and a dream that I could compete with the best and believed any dream was possible.  All those lessons throughout my years growing up would be instrumental in reaching our teams goals.   As I carried these early traits from elementary into junior high and on to high school, I became hungry to be the very best.  I felt a hunger to compete with the best. 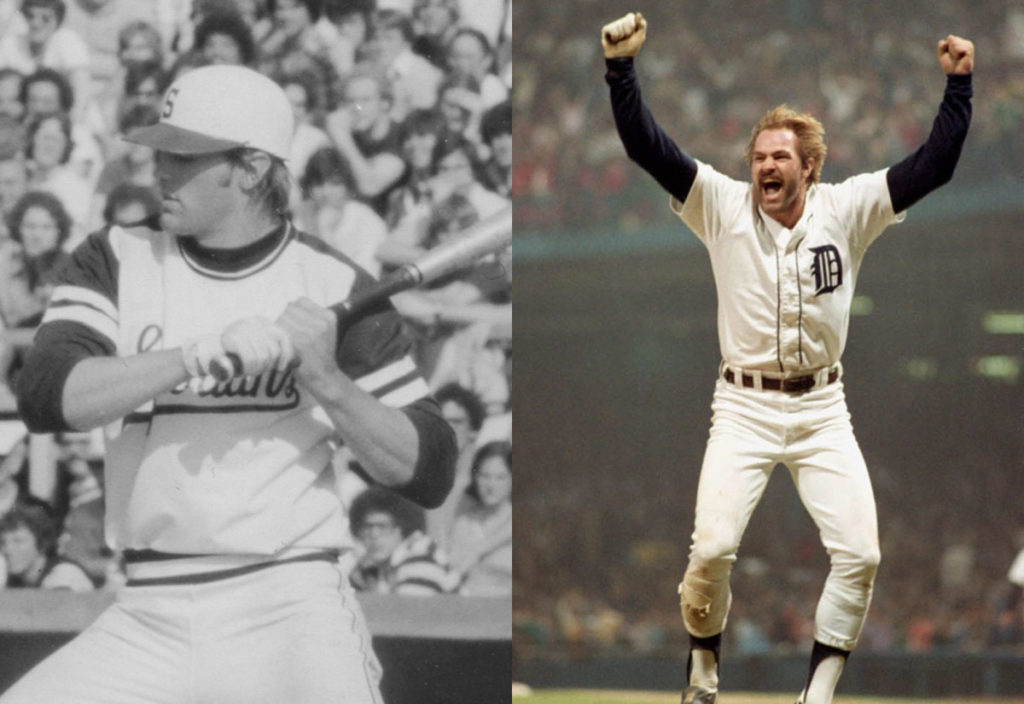 Opportunities continued as I became more driven through college at Michigan State University where I played football.   At that time my dream was to become a top NFL draft pick.   Little did I know baseball would be my calling.   After playing one season of baseball at MSU my junior year, I signed a Major League baseball contract with the Detroit Tigers.  I was going to play baseball for my hometown team.  After playing 52 games of Class A baseball during the summer in Lakeland, I was feeling even more confident as I returned to play football my senior year at MSU.  Winning the Big Ten Championship made me feel completely invincible.  After the regular football season I played in the Hula Bowl, then the Senior Bowl the next week…and then football was over… forever!  On to AAA to play another 50+ games under Jim Leyland, and winning the championship.  It was so much fun celebrating together.  The next day I was off to the Big Leagues   It took 5 years but finally… we won the World Series Championship in 1984.   We accomplished our dream to be the best in the world.  Looking back I learned so many valuable lessons and had to make constant adjustments.  Fighting failures became routine, having great teammates inspired me to get back up whenever I got knocked down.

It took 5 years but finally… we won the World Series Championship in 1984. We accomplished our dream to be the best in the world. Looking back I learned so many valuable lessons and had to make constant adjustments. Fighting failures became routine, having great teammates inspired me to get back up whenever I got knocked down.

I went on to attain another World Championship in 1988 with the LA Dodgers and was fortunate to hit a historic homerun and have a place in Major League Baseball history forever.  As I retired in 1995 I began to wonder, what will I do, what will be my “new” World Series?

Ironically in the late 90’s I ended up becoming part of the media with Fox Sports Detroit.  Then stumbled into coaching when my good friend, Alan Trammell took the Manager’s job with the Detroit Tigers.  From there another opportunity came along to be the Bench Coach with the Arizona Diamondbacks alongside another former teammate, Bob Melvin.

Unbelievably beyond that, I became the Manager in 2010 for the Diamondbacks and we won the National League Division in 2011.  Little did I know the biggest challenge of my lifetime would come four years later and I had no choice but to accept.

After being relieved by the Diamondbacks near the end of the 2014 season, I accepted an offer to telecast 60 games for the Detroit Tigers during the 2015 season.  Opening Day in the broadcast booth is a day I’ll never forget.  As we prepared to telecast the game, I was hit with great anxiety on camera which lasted throughout the entire game.  During the postgame wrap up I totally locked up and was unable to talk.  I knew I needed guidance on how to deal with the issues I had been ignoring … I contacted a good friend., two days later I was diagnosed with Parkinson’s Disease.

I knew I needed guidance on how to deal with the issues I had been ignoring. I contacted a good friend and two days later I was diagnosed with Parkinson’s Disease.

I felt overwhelmed and was not sure what this meant but was thinking the worst. I had encountered many negative thoughts on the field and overcame them by constantly affirming positive experiences …remembering how good success made me feel. I will use this again as I am faced with a “new” World Series…competing against my new opponent…Parkinson’s Disease.

Reflecting back, I try to understand the signals I had along the way.  I can remember back in 2007 while I was shaving with my right hand, my left hand began to clutch.  I thought it was weird at first but wiped it away.  Often my neck became stiff and painful.  My left arm became glued to my left side.  It was diagnosed as a pinched C67 disc problem and I went on to have surgery to repair it.  Surgery gave minimal relief.  My left shoulder began to hurt so I had another surgery to alleviate that problem.  I believed these ailments were caused by athletic wear from years of competition.  There were other problems along the way but I asked myself if I was just getting old or is it something else?  At times the anxiety made me feel like I couldn’t operate.  Being out in public and covering it up was exhausting, starting to stick my hand in my pocket so nobody would notice.  I started to limp when my left foot went forward.  Again, pawning it off as an orthopedic problem.  Even though I saw medical personnel on a regular basis all through my years in sports – we missed it.  And I lived in denial that something was wrong because my personality was to never give in to anything.

Since I was diagnosed with Parkinson’s I’ve become much more reflective.  I’m learning what I’m up against and realize how many others may have a similar story.  Understanding the journey for several years now, I have changed the mission for the Kirk Gibson Foundation to not only help find a cure for Parkinson’s Disease but, most importantly, help others through their journey by developing outreach options for those living in denial and for those who have been diagnosed.  Promoting collaboration, cooperation and team work for those living with Parkinson’s Disease, for the caregivers who support loved ones and friends, and for anyone who deals with this very challenging disease.

It is my mission to help people through the tough times.  I’d like them to understand they have a new normal.  Finding out you have PD will certainly get your attention.  It may be uncomfortable…but understand by coming together as a team can help make it easier to accept and easier to conquer.

The Kirk Gibson Foundation is dedicated and on a mission to raise awareness for people to recognize symptoms and to help identify this disease.  Helping them to find treatment options, therapy, proper medicine, and to rally institutions and organizations who are searching for a cure.  We know we cannot do it alone but are committed to being a resource.  We remain committed to helping people deal with their condition until we find a cure.

In closing, don’t be embarrassed if you are diagnosed.  I came clean immediately about my condition and found it was a considerable weight off my back.  You will be amazed at the outpouring of support from those around you.  Please support the Kirk Gibson Foundation…join our TEAM….lets win the PD World Series!!